Paul Edward Perry was a member of the crew of the submarine tender U.S.S. CANOPUS (AS-9), serving in the Philippine Islands. After the ship was severely damaged on December 29, 1941, and subsequently scuttled to prevent the vessel from falling into enemy hands, he and his surviving comrades joined the ground forces in defense of Bataan and Corregidor. He was subsequently captured and interned as a Prisoner of War.

Seaman First Class Paul Edward Perry (NSN: 3418915), United States Navy, a former crewman of the U.S.S. CANOPUS (AS-9), was captured by the Japanese after the fall of Corregidor, Philippine Islands, on 6 May 1942, and was held as a Prisoner of War until his death while in captivity. 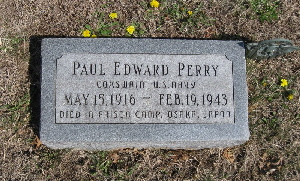