Unexpected Heroes
The Men of the USS Canopus (AS-9)
and the Ship the Enemy Couldn’t Sink. 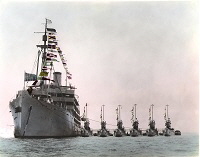 By 1941, USS Canopus (AS-9) was an old ship.  For years, as part of the United States Asiatic Fleet, it and its brood of submarines, had shown the flag in China and throughout the Pacific.  The months leading up to U.S. involvement in the war found the Canopus in Manila Bay.

The war came to the Philippines soon after Pearl Harbor, and McArthur declared Manila to be an open city.  The Navy dispatched all of its ships from the area, except for the Canopus, which was relocated to the Bataan peninsula.

By the end of 1941, Canopus had already received its first bombing.  The bomb went through the munitions, but the heroics of the crew, as well as the flooding and steam leaks kept the ship from blowing up.  Time after time, the Japanese bombed the ship, but they were unable to sink her.  Finally, she was towed into the bay.  With a huge list, her booms askew, and smoke from smudgepots pouring from holes, she appeared to be derelict and abandoned.

However, every night the repair shops were open for business.  With her submarines gone, The Army and Marine Corps became her customers.  Repairs, supplies, food, whatever.  If the Canopus had it, and someone needed it, it was available.

The guns had been removed, and were mounted in the hills.  Men who weren’t part of the repair effort formed Naval Battalions that fought in the jungles.  The Ship’s boats were armed and armored, and were turned into a fleet of “Mickey Mouse Battleships” that attacked Japanese on the beaches.

Finally, in April 1942, with the Japanese advancing, the order was given to destroy any thing of use to the enemy.  The Canopus, under her own power, steamed to deep water, and was put to rest by the men who had served on her.

The end of the Canopus is not the end of the story for what was left of her crew.   Captain Sackett was in the last group to leave Corregidor, onboard USS Spearfish (SS-190).  Upon his return to the U.S., he wrote a lengthy history of the Canopus, and mailed it to the families of the men.

The rest of the crew was on Corregidor, living in caves.  They owned only what they wore, and were sick, starving, and fighting for their lives. Finally, the ones that lived were captured by the Japanese.  Some were executed for sport.  Some died in the “Hell Ships” or on marches.  Many did not survive the POW camps or slave-labor camps.  But none went home before the end of the war.