During the 1930s, The Canopus and her brood of Submarines spent a lot of time showing the flag throughout Asia. Onboard Canopus at that time was Bos’n Glenn Roy Landis, who joined the navy in 1930 after lying about his age at 17.  He saw the much of the world before he left the Canopus about 2 months before the Japanese invaded the Philippines. He retired in 1953 as a Chief Boatswains Mate and passed away in 2003.

While touring Asia, Landis put together a Cruise Book - 87 pages with over 300 fantastic pictures of his adventures throughout the Philippines, China and Japan. In addition to pictures of people and places, he has pictures of the Canopus, Submarines (diving and surfacing), Destroyers, and even a German Cruiser.

He also has a number of other pictures. These are pictures that I can explain neither how nor why they ended up in his Cruise Book. Many are disturbing and some are quite graphic. These include pictures of Russian Famine and China’s battles with itself and Japan. They are a part of this planet’s bloody history, and Landis clearly intended for them to be part of his memory. Therefore, I have included all of them in this Album. 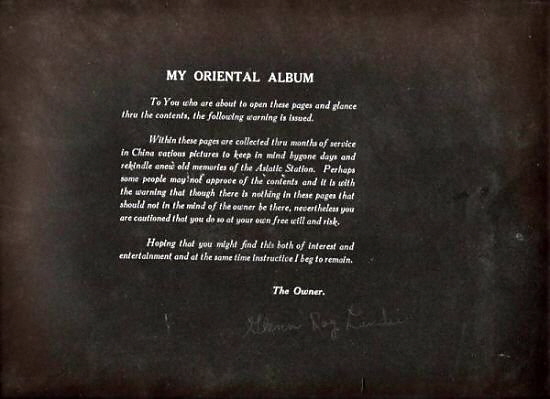 Special thanks to Robert Kevin Walsh, who provided the pictures and to Mike Wallis, historian of the Peoria Submarine Veterans, who scanned them.