Vice Admiral Kenneth R. Wheeler, the 31st Chief of Supply Corps passed away on 29 April, 2002, at the age of eighty-three. Services will be held in Statesville, North Carolina, where he resided, on 13 June. This will be followed by a full honors internment at Arlington National Cemetery on 20 June 2002.

Vice Admiral Wheeler was born in Huntsville, Arkansas, in 1918.  A 1939 graduate of the University of California at Berkeley, he was commissioned an Ensign in the U.S. Naval Reserve through the ROTC program.

Following service onboard USS HULL (DD-350) and training at the Navy Finance and Supply Corps School, Philadelphia, he reported for duty as Assistant Supply Officer, Naval Shipyard, Cavite, Philippines, and was serving there at the time of its attack on 8 December 1941. Subsequently evacuated to Bataan, he served aboard USS CANOPUS (AS-9) and as Supply Officer of the Provisional Naval Infantry Battalion, until being ordered to Corregidor in April 1942.  Present during the fall of Corregidor, the young officer  became a Prisoner of War for three and a half years, bravely enduring and ultimately prevailing through unspeakable hardships.

Following captivity in such locales as Corregidor,Cabanatuan, and Davo, in December 1944, then Lieutenant (jg) Wheeler was among a group of POWs headed for Japan aboard the transport ORYOKU MARU, when the ship was torpedoed and abandoned. After assisting a seriously wounded Supply Corps shipmate to the beach, he, amidst significant enemy gunfire, repeatedly swam back to the ship to rescue others, an action which earned him the Bronze Star Medal.  He was awarded a second Bronze Star for equally heroic and dedicated actions in January of 1945 in the wake of an attack on another prisoner ship. This citation reads in part: "When the prisoner group finally reached Fukuoka Prison Camp, he heroically endured below-freezing temperatures in unheated prison barracks to care for the sick and wounded and, as a result, contacted pneumonia, which almost resulted in his death.  By his outstanding fortitude, great personal valor and self-sacrificing devotion. . .he contributed greatly to saving the lives of many of his companions."

Following his liberation in 1945, Admiral Wheeler went on to have a brilliant post-war career, performing superbly in key assignments at the Aviation Supply Office and Naval Air Station, Jacksonville, prior to serving, in 1960, as Director of Supply Corps Personnel, and, three years later, as Commanding Officer, Naval Ordnance Supply Office, Mechanicsburg.

Achieving Flag rank in June 1965, Rear Admiral Wheeler served as Deputy Chief of Staff for Logistics and Management on the Staff of the Commander in Chief, U.S. Atlantic Fleet, before assuming command of Navy Accounting and Finance Center Washington.  Rear Admiral Wheeler was named Commander Naval Supply Systems Command and Chief of Supply Corps in June 1970. His distinction in these critical roles earned him a third star in January 1973, at which time he was designated Vice Chief of Naval Material, becoming the principal advisor to the legendary Admiral Isaac Kidd, Jr., and exercising authority over six deputy chiefs and six Systems Commanders.

Vice Admiral Wheeler retired in September 1974, after thirty-five years of service, but in the nearly three decades that followed, he remained true to his Supply Corps and Navy roots. Along with his beloved wife Marilyn, he was a fixture in the Supply Corps community of Jacksonville, Florida, and, subsequently, a prominent, highly involved civic leader in Statesville, North Carolina.

Admiral Wheeler will be remembered not only for his unselfish and courageous service to our nation, but also as an eloquent speaker whose account of his wartime experiences inspired generations of young Americans, among them many students at the Navy Supply Corps School in Athens. While he remains for all of us a cherished link to World War II and, moreover, an exemplar of what Tom Brokaw has rightly called "America's greatest generation,"  Vice Admiral Wheeler would not have wanted us to dwell on the past, for he always maintained an abiding interest in the future of our Corps and its people to the end of his days. His enthusiasm and counsel and mentorship to junior and senior officers alike will be sorely missed. While Ken Wheeler, the man, has left us, his example will endure forever. Let us celebrate the memory of this patriot, extraordinary leader, and devoted friend of our Corps with everlasting gratitude and pride.

Contributions in memory of VADM Wheeler may be made to the Navy Supply Corps Foundation, 1425 Prince Avenue, Athens, GA 30606-2205. 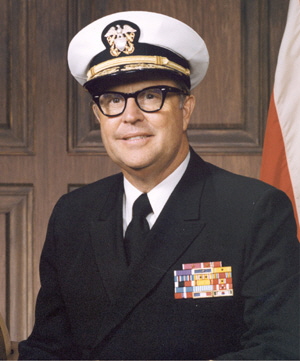 A World War II veteran and the 31st Chief of Supply Corps, he retired from the Navy in 1974 after 35 years of service. His last assignment had been as Vice Chief of Naval Material.

He is survived by his wife, Marilyn Bennigsdorf Wheeler, and daughters, Sandra Lee Hartman and Christine W. Will; a son, Elliott Ray; and seven grandchildren. Services were held in Statesville, North Carolina, on June 13 with full honors interment at Arlington National Cemetery on June 20. 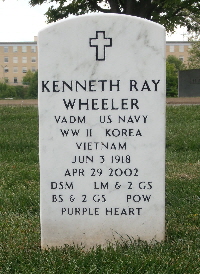 [Lore of the Corps]