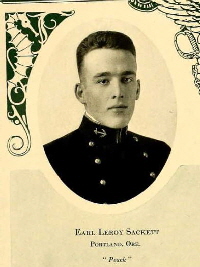 Rear Admiral Earl LeRoy Sackett was born in Bancroft, Nebraska, March 29, 1897 and grew up in Nampa, Idaho, where he graduated from high school with the Class of 1915. During high school he served in the Idaho National Guard.

Entering the Navy after high school, he served one year (1915-1916) during World War I as a Navy enlisted man attaining the rate of Electrician's Mate Third Class. After open competitive examination and appointment to the U.S. Naval Academy, he completed a three-year wartime program in 1919 but still graduated with his class of 1920. He received a Masters of Science degree in Mechanical Engineering from the University of California in 1934.

Commissioned Ensign in 1919, he served on the battleship Florida, and three destroyers, McCalla, Herbert and Isherwood, before attending Submarine School at New London. After Submarine School he served on submarines USS R-13, USS R-19, then commanded the USS R-2. From 1927-1929 he was an instructor of electrical engineering at the Naval Academy. He then served on the submarine tender USS Beaver, AS-5, and commanded the USS S-37 in the Philippines. From 1934-1937 he served as Assistant Engineer Officer aboard the U.S.S. Saratoga and was posted at the Portsmouth Navy Yard as Machinery Chief from June 1937 to December 1939. While at Portsmouth, Sackett was an assistant to Admiral Cole during the salvage of the submarine disaster Squalus in 1939. In February 1940 he assumed command of the USS Canopus, AS-9, in the Asiatic Fleet in Manila Bay.

Admiral Sackett advanced through the ranks to Rear Admiral. As a Navy Commander, he was captain of the U.S.S. CANOPUS, AS-9, from 1940 until it was scuttled in April 1942. CANOPUS was stationed in Manila Bay at the outbreak of World War II and under command of Cdr. Earl LeRoy Sackett, saw action for four months during the Battle of Manila Bay at the Bataan Peninsula. The ship was scuttled at the hands of her own crew in Mariveles Bay at the tip of Bataan when Bataan fell to the Japanese on April 9, 1942.

Sackett and his crew were taken out to the island of Corregidor where the crew was used as beach defenders with the Fourth Marine Division in foxholes and caves along the shoreline and in the ravines of the island. Many of his crew were captured by the Japanese when Corregidor fell on May 6, 1942, and spent the next 40 months of WW-II in Japanese prisoner of war camps across the Asia Pacific. Comander Sackett was evacuated from the Philippines on May 4, 1942, just two days before the surrender of Corregidor. His evacuation was on the last submarine out, the U.S.S. SPEARFISH, SS-190.

By July 1942, Earl Sackett was back in the USA, and was recognized as a war hero with an award of the Navy Cross for heroism, for what the Canopus and her crew, under his command during the First Battle of Manila Bay, was able to accomplish. The Canopus had been attacked eight times while in the bay but was only hit twice by the Japanese and Commander Sackett decided to set her up to look like a derelict by providing the ship with a decided list, tangled cargo beams and fake fires caused by burning oily rags in smudge pots. The Japanese, duly fooled, left her alone after that and the Canopus became the general utility repair ship for both the Army and the Navy, providing crucial service.

After returning to the U.S. from the Philippines, Earl Sackett served his country and the war effort by commanding the Submarine Repair Facility in San Diego from July 1942 to January 1944 and then as a member of the analytical staff of Fleet Admiral Chester A. Nimitz in Hawaii from December 1944 to January 1946. He retired from active duty on January 1, 1947.

Admiral Sackett died on October 7, 1970 and was buried with full military honors at Arlington National Cemetery.

Died on October 7, 1970 and was buried with full military honors in Arlington National Cemetery.

The Navy Cross is presented to Earl L. Sackett, Commander, U.S. Navy, for extraordinary heroism and distinguished service in the line of his profession as Commanding Officer of the U.S.S. CANOPUS (AS-9), in action at Cavite Naval Yard in the Philippine Islands, and subsequently in the defense of Manila Bay, during the period 7 December 1942 through 9 April 1942.

Commander Sackett participated in operations of strategic importance involving hazardous missions, while exposed to frequent horizontal and dive bombing attacks by Japanese air forces. Commander Sackett's inspiring leadership and the valiant devotion to duty of his command contributed in large measure to the outstanding success of these vital missions and reflect great credit upon the United States Naval Service. 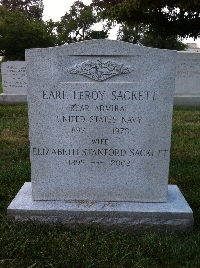