My friend, the late Chuck Piper GM2, who was also an Associate member of Seattle Base, was involved with the Peleliu landings and also the island of Angaur to the south. 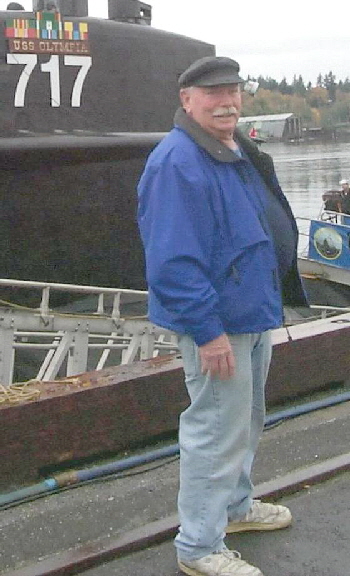 Everyone was abandoned there after Iwo was taken. MacArther didn't need the islands anymore. Chuck told many stories about being there. In fact most don't know but the main island in the group, Babelthuap, had 40,000 Japanese on it and was never taken or landed on. They use to take small boats past the island and shoot up the outhouses the Japanese had built out over the water with .50 caliber machine-guns. The Japanese would return with artillery and mortar fire. They did lose a few boats that way.

Chuck told of one morning very early and still dark standing in the chow line for breakfast and that someone noticed a Japanese soldier in line with them. He was starving to death and must have said "what the hell" and tried it. He was fed after taken into custody. There were about 1200 Japanese cornered up in the NW corner of the island, well dug in.

He was a skin diver before the war and when the landing on Angaur was made they had him dive the wrecks in the harbor there to make sure they weren't mined. He noticed after a while that after he came up for air each time he would see things dropping down past him. Finally he grabbed one and looked at it. It was a bullet!!! A sniper was taking pot shots at him. the Marines located him in a small building at the end of the small pier there. Needless to say he didn't shoot anymore after that.

These are just a few memories of have of this really great friend. He loved being a member of subvets though he never served on one. He would have made a great boat sailor.