The Peleliu operation was to be conducted by two divisions, one Marine and one Army. In the Pacific area since mid-1942, the 1st Marine Division was a veteran, combat-tested organization which launched the first offensive landing in the Pacific War when it attacked Guadalcanal on 7 August 1942. After a period in Australia of rest, recuperation, and training of newly joined Marines, the division made its second amphibious assault on 26 December 1943 at Cape Gloucester on New Britain Island. When the division landed on Peleliu, its regiments (1st, 5th, and 7th Marines, all infantry, and 11th Marines, artillery) contained officers and enlisted Marine veterans of both landings as well as new troops. Before World War II ended, the 1st Division was to participate in one last battle, the landing on Okinawa. 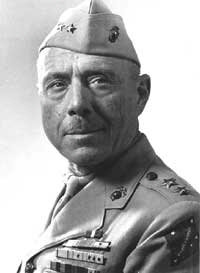 Major General William H. Rupertus, the 1st Division commander, had been with the division since early 1942. As a brigadier general, he was the assistant division commander to Major General Alexander A. Vandegrift during the Guadalcanal campaign. He took command of the division for the Cape Gloucester operation. General Rupertus was commissioned in 1913 and served as commander of a Marine ship's detachment in World War I. During subsequent years, he was assigned duty in Haiti and China. Following the Peleliu campaign, he was named Commandant of the Marine Corps Schools in Quantico. General Rupertus died of a heart attack on 25 March 1945, while still on active duty.

The Army's 81st Infantry Division — the Wildcats — was formed in August 1917 at Camp Jackson, South Carolina. It saw action in France at the Meuse-Argonne in World War I, and was deactivated following the end of the war. The division was reactivated in June 1942. It went to several Pacific training bases before its first combat assignment, the landing on Angaur. After securing Angaur, it relieved units of the 1st Marine Division on Peleliu. When Peleliu was secured, the Wildcats began training for Operation Olympic — the assault on Japan proper. The Japanese surrendered unconditionally after suffering two atomic bomb attacks. As a result, instead of invading Japan, the 81st occupied it. On 10 January, the 81st Infantry Division was once more deactivated.

Major General Paul J. Mueller, USA, the commander of the 81st Division, was a graduate of the famous West Point Class of 1915. He commanded an infantry battalion in France in World War I, and during the interwar period he had a succession of assignments to infantry commands, staff billets, and schools. In August 1941 he assumed command of the 81st Infantry Division at Fort Rucker, Alabama, and moved his division during its training period successively from Florida to Tennessee to California before its commitment to the battle for Angaur and Peleliu. General Mueller served on active duty until 1954, when he retired. He died in 1964.

Divisions and their Commanders